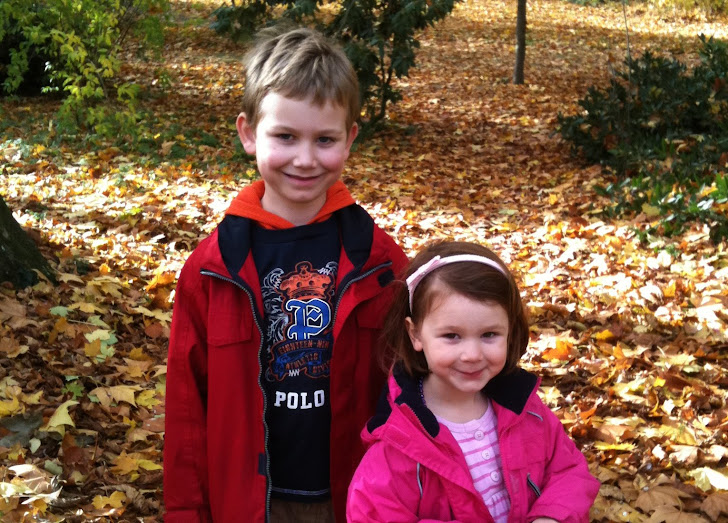 
So, on day one of our giant road trip through Northern France, we headed for Reims, in the Champagne region, stopping off at the WWI battle site of Verdun along the way.

The Memorial museum just outside the town of Verdun was really impressive. 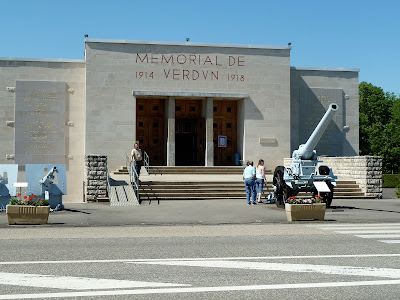 Will thought the giant guns outside were particularly cool. 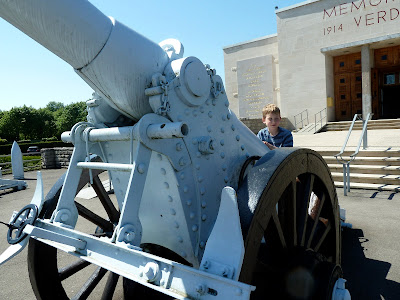 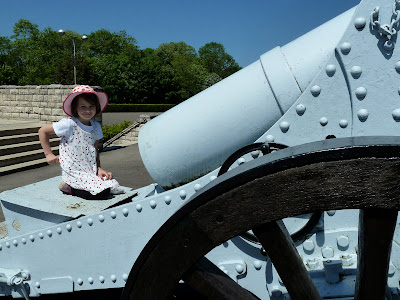 Inside the museum, which was quite busy, we found a real WWI fighter plane: 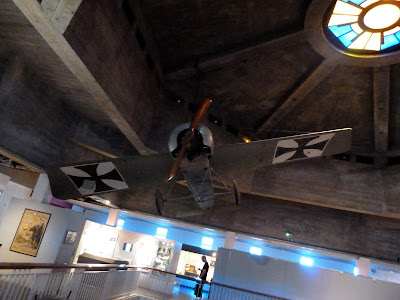 The museum also housed a ton of WWI artifacts (soldiers' belongings, uniforms, guns and weapons), and some rather gory before & after pictures of injured veterans who underwent what were probably the first facial reconstruction surgeries ever.  (No pictures of that, don't worry.)  For me, one of the most impressive displays, however, was this below, which showed what the area around Verdun looked like after the battles: 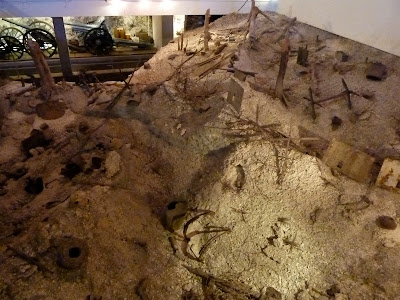 Verdun, of course, was the site of some of the most violent and destructive fighting in WWI, and many of the nearby towns were not just damaged but completely obliterated.  We learned that there were nine villages nearby that were totally destroyed, literally wiped off the face of the earth, and never rebuilt.  These towns are known as les villages détruits of Verdun.  Each town is marked with a sign, but for most of them not a stone remains: 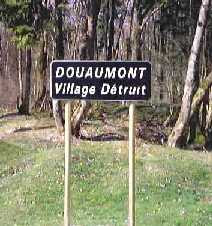 How sad to think an entire town (or 9!) could be completely erased from the map and never rebuilt! We also learned that in 1919 a law was passed that gave each of these destroyed villages a municipal commission with a president who functions like a mayor for these "ghost" towns.   I'm not sure what these mayors do, exactly, without a town to govern but it seems like a nice way to ensure these villages are not forgotten entirely.

For more information on the destroyed villages:
http://www.webmatters.net/france/ww1_verdun_detruit.htm

After the museum, we drove by the Ossuary of Douaumont, where the bones of 130,000 unknown soldiers are interred, but the kids were ready for lunch so we didn't stop: 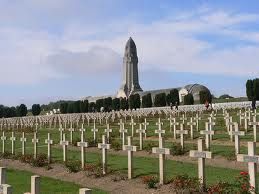 Since it was a beautiful, sunny day, we stopped for a quick lunch at a nearby outdoor cafe. 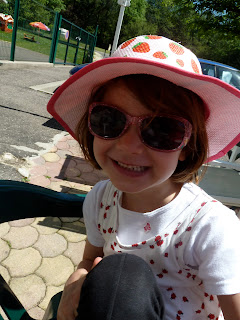 The kids had their usual -- Will a Croque Monsieur and Kate an omelette -- because, for some strange reason, they had no interest in ordering the Andouillette:


It must lose something in the translation, don't you think??  Coincidentally, a salad I ordered later in the trip was adorned with this particular sausage and, though I knew what it was, I gamely tried it.  And instantly regretted it.  I'm a pretty adventurous eater and will try anything once, but this was...not good.  It tastes exactly how you'd imagine intestines filled with stomach would taste.

After lunch we drove over to the nearby Bayonet Trench memorial: 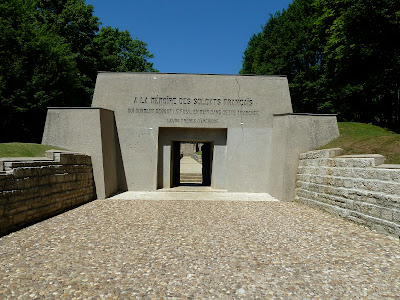 This memorial marks the spot where about a dozen soldiers' bodies were found in a trench after the war, their bayonets sticking out of the ground in a line.  The soldiers, all "unknown," were probably killed by a sudden bombardment and were buried in the trench where they lay. 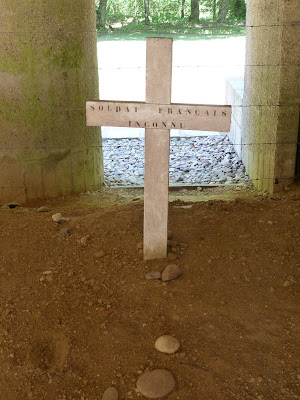 After visiting this memorial, we got back in the car and headed off to a less solemn destination, Reims (which, incidentally, is very hard to pronounce in French:  RANCE, with that tricky French "R" at the beginning and just a hint of an "N").  Reims is known for two things:  1) Champagne (it's the capital of the region) and 2) its magnificent cathedral: 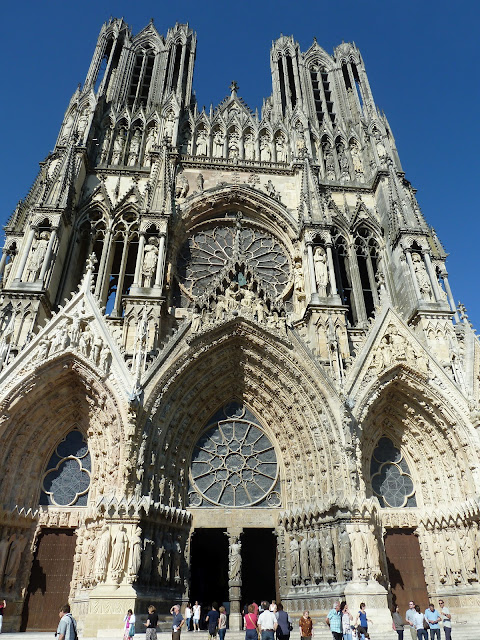 It really is impressive, from all sides: 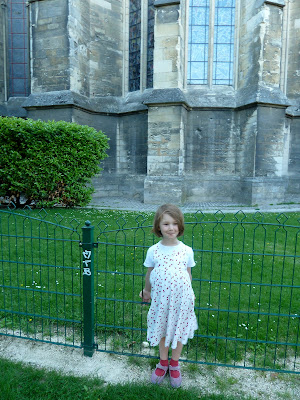 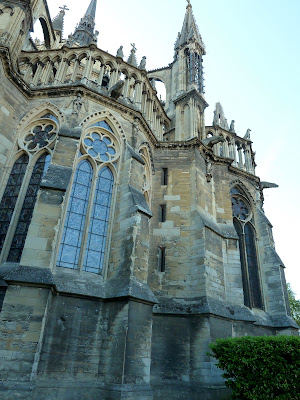 The cathedral is adorned with many statues, but this smiling angel is the most famous. 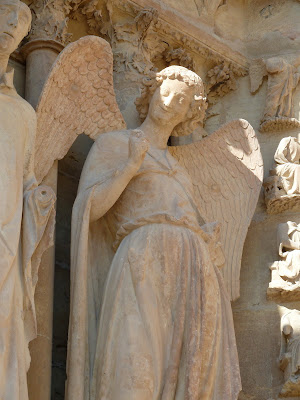 The kids and I played "who can spot the angel first" and we had a bit of confusion since there is actually more than one smiling angel:


The weather couldn't have been better and the kids had a blast playing in the courtyard in front of the cathedral.  Will even posed for me... reluctantly: 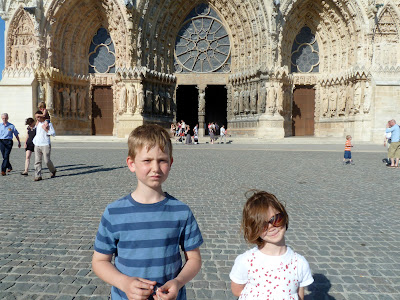 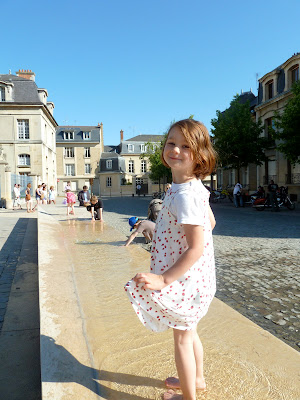 While Kate was splashing in this fountain, a little French girl ran up to her, pulled out a tube of sparkly pink lip gloss, applied it to Kate's lips and then promptly ran off.  Kate thought that was just about the best thing ever.  Guerilla makeover!

After the kids had their fill of splashing and running about, we had a nice dinner and enjoyed a glass or two of something bubbly: 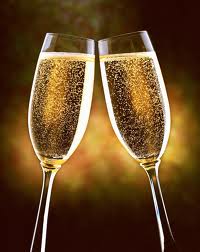 A perfect end to a wonderful day...

Posted by WillandKateandJennifer at 9:04 PM